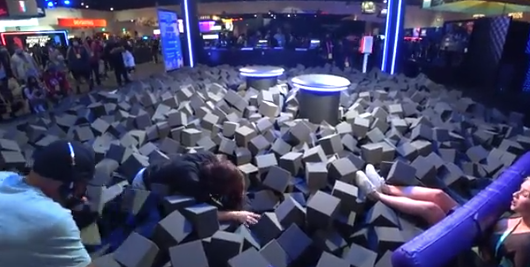 Chechik was in San Diego at the convention when she attempted a jump into a foam pit during what appears to be a promotional set. While the pit has foam blocks, it nonetheless seems to causes serious multiple injuries nevertheless.

After she jumps, things feel innocuous and “as planned.” But as time goes on, it becomes clear that Chechik is experiencing some sort of problem. Help is summoned immediately following.

Chechik announced to her Twitter followers that the stunt resulted in two injuries to her back.

And things get worse (both for Chechik and TwitchCon).

Chechik’s injuries were so bad, she required surgery several days following the incident.

In case you (like the rest of the world) are curious as to how you get such serious injuries from a foam pit, let’s just say that things weren’t what they seemed.

Apparently, the foam blocks were the only padding that separated the jumper from a concrete floor. This feels like an insanely irresponsible set up pending TwitchCon anticipated anyone jumping into the pit. It is likely that Chechik’s body made direct, and unprepared, contact with the hard concrete floor.

Here’s what is more astounding.

Another TwitchCon guest was in a wheelchair due to dislocating her knee in the same foam pit prior to Chechik’s injury. Yes, I said PRIOR.

And Chechik seems to be heading in the direction we’re all thinking (yes, probably litigation, just read between her most recent lines regarding the situation.

“For the ppl asking why did u jump. Don’t try and turn me into the bad guy. I am among all those who assumed it was met with proper safety precautions. It’s like getting into a car assuming the air bag will work and it doesn’t. I’m not at fault. None of the victims injured are.”

TwitchCon did eventually close the pit down, albeit, much too late. Chechik and others signed a waiver prior to jumping, but let’s be honest, they assumed reasonable safety precautions were met.