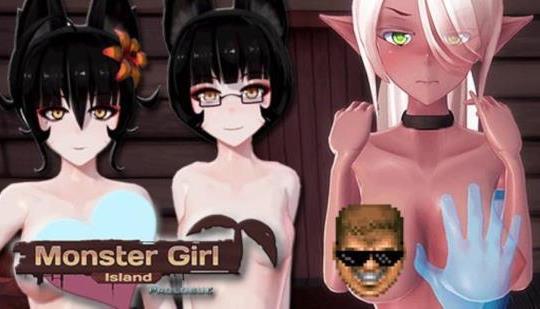 There are times that even we, adult game reviewers, feel a bit surprised by the concepts of games we see. It takes a lot to befuddle us, but it does happen. With Steam’s Monster island, consider us “befuddled” to the final befuddlment line.

Here’s a review of Monster Island, a popular NSFW game you can find on Steam.

Monster Girl Island – What Is This Game?

Monster Girl Island is a mysterious place and you’ll need to figure things out. But you’re encouraged to have fun while its happening.

The dialogue is color coded to represent the impact which it has on the overall game. Some dialogue choices may impact the game’s longer timeline then others. Blue choices are meaningless. White choices (seen below) mark impactful decisions.

Now, as mentioned, Monster Girl Island is found on Steam’s gaming network under the adult section. This requires that you age verify and allow adult content through your personal settings. That said, some more extensive portions of Monster Girl Island can only be accessed by way of their Patreon page. That’s a few chapters ahead.

Your in-game relationship choices are filled with optional, consensual themes.

The graphics are animated and pretty dope, though some of the scenery definitely feels a bit vacant. We assume the developers are working on that, though, as Monster Girl Island is a work in progress at this juncture. The overall image/animation rendering is pretty damn solid. And the sex scenes are vivid, and although fictional experiences, offer robust experiences. The VR makes the sex scenes even better.

You control the speed in the sex scenes which is an additional layer of customizations.

For better or worse, Monster Girl Island feels a bit unpolished at times. But our understanding is that there are limited developers working on its evolution.

Monster Girl Island has a mapping feature that allows you to more precisely navigate. See below.

Understand your character’s power and statuses.

The characters in Monster Girl Island appear 3D with often out of focus backdrops that help the character pop from the screen. Most of the females are voluptuous, hippy, breasty characters with lot of attention given to eyes and. Monster Island characters’ eyes drive any emotion present in scenes more than facial expressions.

You can see a clear example of what we’re saying here:

Here’s a few more, which includes some that almost feel a bit demonic. The artistry in Monster Island is as good as it gets for any game of this nature. In fact, it’s the core reason anyone would play the game.

Monster Girl Island is a deeply rich animation experiences that features bold sex scenes and a lineup of surreal monster characters. You can find the game on Steam.